Today was my first real Saturday in my house. Last weekend my mum was here and the weekend before my army of friends was helping me to move in. I was a little worried I’d go stir crazy by myself but I’ve actually had a grand day.

Granted I did see one friend and his girls as I discovered I’m too short to change the battery in my smoke alarm and it was going off all through the night last night. But that was just a short visit.

For the rest of the day I entertained myself! I went to the gym (and in the process discovered there is no quick way to walk there) and the library (2 new books!) And after lunch went to aldi to get some groceries.

My friend Karen is coming to afternoon tea tomorrow so after my aldi trip I made a cake. After all that I planned on sitting down with a cuppa and watching Grease 2…

However…I then got a sewing urge. 4 hours later I have made 2 skirts. The first was a bit of a flop as I followed the measurements on the pattern I found on Pinterest which were WRONG! But the second I did without a pattern, just making it up as I went along and I have to say I’m chuffed with the result!

You can’t tell but the fabric is actually a bedsheet that I got on sale. I think it’s a pretty pattern. It has 2 darts at the front to give it shape, french seams (cos I learned how to do them after watching The Great British Sewing Bee) and a zip at the back.

Yay me!! Another few Saturday evenings like this and I’ll have a whole new wardrobe!

Hope your Saturday was lovely too
-x-

Today has been a good day 🙂

It felt like a good day from the minute I woke up, and it really hasn’t disappointed!

I had a little lie-in, then got up for church and for the first time in about two weeks I didn’t have mad panics trying to work out what to wear [I’m not usually that girl but recently none of my clothes have felt right and it takes a proper old drama and tizzy to find any outfit that I’m happy with] and just wore jeans and a top that I felt comfy in. I even felt like my hair looked good – it’s been difficult these past weeks because I’m trying to grow it longer for this but it’s at that awkward place where it doesn’t want to do anything and I end up shoving it in a ponytail or bun – Not so today, I left it down and felt good about it!

I read my Bible whilst eating my breakfast, and I’m at that bit in Numbers where the donkey talks so that’s always a treat! Makes me giggle to imagine it.

After breakfast it was off to church, where I chatted to some lovely folks whilst drinking tea out of my favourite green mug (I have a little contest with a guy from church to see who gets the green mug each week – this week he had left it for me! How sweet) It really is the best mug.

I was serving in creche for the 9am service, and it was the most chilled out time we’ve ever had – 9 little ones between 3 helpers, and the cutest little kiddos. Admittedly there was a LOT of snotty-nose wiping and at one point, one of the other ladies’ had to physically hold my child’s head so I could wipe the gunk off his face…but other than that, we played and we sang and we cuddled and it was just joyous!

Because of serving in the first service, and because I wasn’t at church last week, I decided to stay for the 11 am service to hear the preach. And yay, for getting to worship at both services. It was a great service, a guy called Geoff preached about how we can evangelise to people by just telling them our own testimonies. Very encouraging and I love his preaching style.

After church I meandered around the supermarket (forgetting one of the only things I actually needed, but coming home with a melon…just because) and went to a discount store to buy fairy lights for Thursday’s shopping evening…and then I came home and watched some of the OC whilst I had lunch.

Anyone else remember how good the first season of the OC was? I simply cannot believe that it was on about a decade ago! It makes me feel so grown-up [old] when I think that I was in my early teens when I watched it. But it was oh-so-good, and just hearing the theme tune makes you want to live in Californiaaaaaaaaa

So yeah, lunch and the OC – falling in love with Seth again, and wishing that silly Anna away because oh-my-gosh-he-is-just-meant-for-Summer-even-though-she-doesn’t-like-him-right-now-she-will-soon. Yay for the teenage romance drama!

And then, in the middle of the Ryan-Marissa angst, I had a sudden burst of Need-to-craft-itis and then proceeded to absolutely cover my living room with floor, pins, tape measures, ribbons, cardboard templates and all other kinds of haberdashery paraphenalia [with my Christmas songs in the background, of course] for about 5 hours and I made some very lovely stockings and tree decorations.

In the midst of my sewing I realised it was dinner-time so I put food in the oven…but then got so absorbed in the sewing that I completely forgot about my dinner and it was only when I looked up and the flat was basically a cloud that I realised it had been in there about an hour too long. 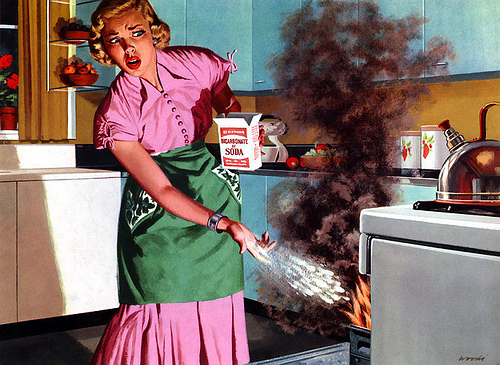 Whoops. Mishap of the day. It was all fine though, I opened all the windows and threw away the burned food and started over – making sure I kept an eye on it. Dinner Mark 2 was actually quite tasty!

Once I was done with the sewing and the flat looked as if a bomb made of fabric & ribbon had exploded…I had a tidy up! And watched some TV (Strictly results…I’m sad Victoria went, but she just isn’t as good as the rest of the celebs and it was her turn. I hope Louis goes next week)

And then, need-to-craft-itis hit me again. So I’ve spent the last two hours in my kitchen messing around with melted chocolate. Not gonna tell you what for (in case it doesn’t work out) but right now it all looks so good. And all this to a lovely soundtrack from Colbie Callait, Lady Antebellum, Agnes Obel and Madeline Peroux – courtesy of Spotify.

I’m just hoping all my crafty stuff sells on Thursday because otherwise I will have a bunch of stuff that I have no idea what to do with! But…that’s a worry for another day!

Once again, a tricky post title…especially since the last post was about my insecurites. What a great idea – give an anxious “never good enough” person a challenge to identify a talent or hobby!

I think there are lots of things that I am good at, but I don’t know if you could define them as talents or hobbies.

Who says what a hobby is anyway?

I mean, I recently edited my CV to add my current place of work and experience, and in doing so also updated my personal information. But when it came to hobbies and interests, I really got stuck.

What do they want you to write?

“I am a black belt in Karate and enjoy watching Kung-Fu films. One day I want to go to China”

“Getting drunk every night down by the water, playing my guitar and smoking pot.”

These are genuine examples that I found during an enlightening Google search!

I think having hobbies when you’re a young professional is quite hard. While it’s said that you make time for the things which you care about, when 50% of your life is spent working and 30% is spent sleeping, and in that left over 20% you need to make time for cooking and eating, bathing, grocery shopping and other stupid things like dentist appointments and haircuts (which I never seem to have time for) … well, there doesn’t seem much left for fun.

That said, if I had to choose I’d say the things that I enjoy doing in whatever free time I have left are:

going to the gym

Which of those would you class as hobbies or talents?